Revista Plos One: "Origins and Evolution of the Etruscans’ mtDNA" 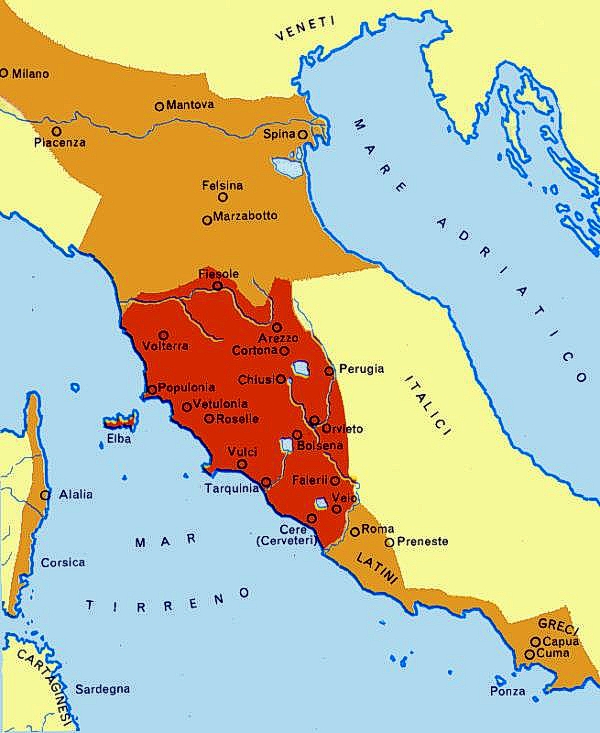 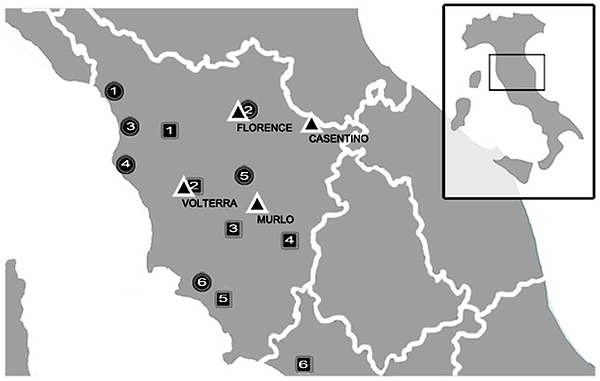 Figure 1. Geographic location of the samples considered in the ABC analysis. ANCIENT ETRUSCANS WERE IMMIGRANTS FROM ANATOLIA, OR WHAT IS NOW TURKEY

June 18, 2007 — The long-running controversy about the origins of the Etruscan people appears to be very close to being settled once and for all, a geneticist will tell the annual conference of the European Society of Human Genetics today. Professor Alberto Piazza, from the University of Turin, Italy, will say that there is overwhelming evidence that the Etruscans, whose brilliant civilization flourished 3000 years ago in what is now Tuscany, were settlers from old Anatolia (now in southern Turkey).

Etruscan culture was very advanced and quite different from other known Italian cultures that flourished at the same time, and highly influential in the development of Roman civilization. Its origins have been debated by archaeologists, historians and linguists since time immemorial. Three main theories have emerged: that the Etruscans came from Anatolia, Southern Turkey, as propounded by the Greek historian Herotodus; that they were indigenous to the region and developed from the Iron Age Villanovan society, as suggested by another Greek historian, Dionysius of Halicarnassus; or that they originated from Northern Europe.

Now modern genetic techniques have given scientists the tools to answer this puzzle. Professor Piazza and his colleagues set out to study genetic samples from three present-day Italian populations living in Murlo, Volterra, and Casentino in Tuscany, central Italy. "We already knew that people living in this area were genetically different from those in the surrounding regions", he says. "Murlo and Volterra are among the most archaeologically important Etruscan sites in a region of Tuscany also known for having Etruscan-derived place names and local dialects. The Casentino valley sample was taken from an area bordering the area where Etruscan influence has been preserved."

The scientists compared DNA samples taken from healthy males living in Tuscany, Northern Italy, the Southern Balkans, the island of Lemnos in Greece, and the Italian islands of Sicily and Sardinia. The Tuscan samples were taken from individuals who had lived in the area for at least three generations, and were selected on the basis of their surnames, which were required to have a geographical distribution not extending beyond the linguistic area of sampling. The samples were compared with data from modern Turkish, South Italian, European and Middle-Eastern populations.

"We found that the DNA samples from individuals from Murlo and Volterra were more closely related those from near Eastern people than those of the other Italian samples", says Professor Piazza. "In Murlo particularly, one genetic variant is shared only by people from Turkey, and, of the samples we obtained, the Tuscan ones also show the closest affinity with those from Lemnos."

Scientists had previously shown this same relationship for mitochondrial DNA (mtDNA) in order to analyse female lineages. And in a further study, analysis of mtDNA of ancient breeds of cattle still living in the former Etruria found that they too were related to breeds currently living in the near East.

The history of the Etruscans extends before the Iron Age to the end of the Roman Republic or from c. 1200 BC to c. 100BC Many archaeological sites of the major Etruscan cities were continuously occupied since the Iron Age, and the people who lived in the Etruria region did not appear suddenly, nor did they suddenly start to speak Etruscan. Rather they learned to write from their Greek neighbours and thus revealed their language. Archaeologists and linguists are in agreement that the Etruscans had been developing their culture and language in situ before the first historical record of their existence.

"But the question that remained to be answered was -- how long was this process between pre-history and history"" says Professor Piazza. In 1885 a stele carrying an inscription in a pre-Greek language was found on the island of Lemnos, and dated to about the 6th century BC. Philologists agree that this has many similarities with the Etruscan language both in its form and structure and its vocabulary. But genetic links between the two regions have been difficult to find until now.

Herodotus' theory, much criticised by subsequent historians, states that the Etruscans emigrated from the ancient region of Lydia, on what is now the southern coast of Turkey, because of a long-running famine. Half the population was sent by the king to look for a better life elsewhere, says his account, and sailed from Smyrna (now Izmir) until they reached Umbria in Italy.

"We think that our research provides convincing proof that Herodotus was right", says Professor Piazza, "and that the Etruscans did indeed arrive from ancient Lydia. However, to be 100% certain we intend to sample other villages in Tuscany, and also to test whether there is a genetic continuity between the ancient Etruscans and modern-day Tuscans. This will have to be done by extracting DNA from fossils; this has been tried before but the technique for doing so has proved to be very difficult."

"Interestingly, this study of historical origins will give us some pointers for carrying out case-control studies of disease today," says Professor Piazza. "In order to obtain a reliable result, we had to select the control population much more carefully that would normally be done, and we believe that this kind of careful selection would also help in studies of complex genetic diseases."