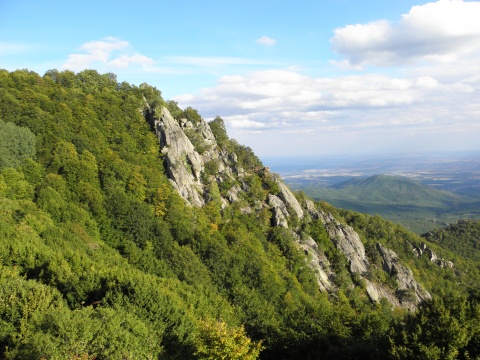 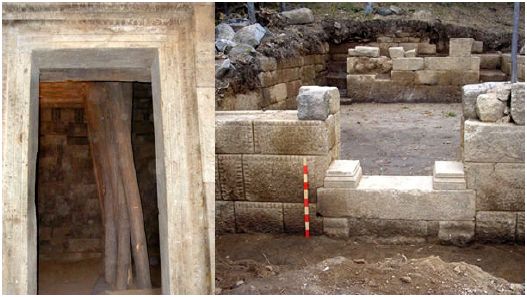 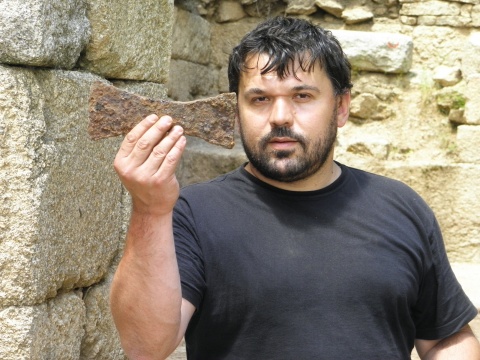 Bulgarian archaeologists have dug up an iron labrys, a ceremonial doubleheaded ax, at the residence of the rulers of the Odrysian Kingdom, the state of the most powerful tribe of Ancient Thrace, located at the mount of Kozi Gramadi.

The ax was discovered on Monday, July 4, 2011, by the team of Ass. Prof. Ivan Hristov, Bulgaria's National History Museumannounced on Tuesday.

It was dug up near the main gate of the fortified residence of the Odrysian rulers, and is the second labrys ever discovered at anAncient Thrace site, after another such ax was found in the same archaeological site during its first more thorough excavation in 2005.

"The new find is very well preserved. It is 22 cm long, and very massive. We have several hypotheses for its use. The labrys was used more for certain types of processions rather than for household or military purposes," explained Dr. Ivan Hristov.

"Another hypotheses is derived from images from tombs in Ancient Macedonia or the tomb in near the village of Alexandrovo, Haskovo District, where the doubleheaded ax is carried by participants in royal hunts. We can assume that the ax was used – if not by the ruler himself – then by some of his associates during hunting. In this sense the finding of the iron weapon in the Ancient Thracian residence is no accident. We can only surmise about the everyday life of the aristocrats at the Kozi Gramadi mount 2 400 years ago when the forests all around the place were extremely good for hunting," the archaeologist said.

Hristov explained the labrys as a term in the Ancient Greek mythology was popular as the doubleheaded ax of Zeus Labraundos, a statue of a standing Zeus with the tall lotus-tipped scepter upright in his left hand and the double-headed axe, the labrys, over his right shoulder, in the mountains near the coast of Caria in Asia Minor.

The first images of labrys appeared in the 2nd millenium BC. In Ancient Thrace the oldest such images date back to the end of the Bronze Age.

For the first time in the Balkans, the labrys appeared as a ruler's symbol on the bronze coins of the Odrysian king Amatokos at the end of 5th century BC. The labrys is also visible on the coin stamps of ther Ancient Thracian rulers such Amatokos the Senior and Teres II. Fewer than 20 findings of a labrys have been discovered in Bulgaria to date.

Not counting the Odrysian rulers' coins, the newly-found ax is the fourth item in the form of a labrys in the Thracian residence at the Kozi Gramadi mount.

The new labrys will be exhibited at the National History Museumwith other Ancient Thracian insignia. The newly found labrys against the background of the Kozi Gramadi residence.

Since the new start of the excavations at the Kozi Gramadi mount this year, the Bulgarian archaeologists have made crucial discoveries, including details about its sacking by the troops ofPhilip II of Macedon.

The discoveries have been made within the project of Bulgaria'sNational History Museum, whose team started in early June 2011 the largest alpine expedition in the history of Bulgarianarchaeology in order to excavate the residence of the rulers of the Odrysian Kingdom.

Bulgarian archaeologists uncovered the unique residence of the rulers of the Odrysian Kingdom in July 2010, after its location was initially detected in 2005.

The residence is located on the Kozi Gramadi mount in the Sredna Gora mountain, in the village of Starosel, close to the resort town of Hissar in central Bulgaria, at about 1 200 m above sea level.

In early June, the archaeologists uncovered in full the northeastern wall of the Thracian kings' residence; it is 13 m long, and has been preserved at a height of 2 m, according to the head of the expedition, Prof. Ivan Hristov.

Not unlike the facade of the building uncovered in 2005, the northeastern wall is made with "perfectly prepared stone blocks with encarved decorations." The building is believed to have hosted the treasury of the Odrysian rulers. It was erected by Ancient Greek architects between 354 BC and 342 BC, which is also when the Thracian kings' residence is dated, during the rule of Odrysian king Teres II (351 BC-341 BC).

The National History Museum says the residence building itself is also preserved up to a height of 2 m. The archaeologists have found the foundations of a second fortress tower located at the southeast of the first fortress wall of the residence.

It is believed that this is the spot through which the troops ofPhilip II of Macedon broke into the fortress and captured the residence of the Thracian kings because the archaeologists have found evidence of severe destruction and damage caused by attacks on the fortress wall and the tower. The remains of the tower guarding the main gate of the Ancient Thracian rulers residence.

Another exciting discovery on the site is a small silver coin minted in the Greek polis of Parion with the image of Medusa, which was used as a medallion of an Ancient Macedonian soldier as the image of the Gorgon monster was believed to have protected the life of its bearer.

The archaeologists have found a bronze umbo, or shield boss, of a Macedonian hoplite.

This localized the place of the first battled of the Thracian troops and the troops of Philip II of Macedon outside the residencefortress.

The Bulgarian archaeologists have also unearthed a complex system of rock canals for gathering water similar to those discovered in the Thracian sanctuary Belintash and the rock city of Perperikon in the Rhodope Mountains.

The alpine excavations are funded with donations by Bulgarian manager Lachezar Tsotsorkov, the Hisarya Municipality, and theNational History Museum.

The archaeological team will have the rare chance of studying the interior of the Thracian kings' residence, which is the only one ever discovered, and was erected during the rules of Odrysian king Teres II (351 BC-341 BC).

The National History Museum points out that the discoveries at the Thracian kings' residence reveal a symbiosis between the local Thracian traditions and the influence of Ancient Greece in the fortifications, architecture, and household tools at the beginning of the Hellinistic Age (323 BC – 30 BC).

Last summer Dr. Ivan Hristov explained that the residence of the Odrysian kings is a monument unrivaled in scope in Southeastern Europe, and that there is no other fortress-sanctuary dating back to the 4th-5th century BC which is so well-preserved.

The Bulgarian archaeologists call the Thracian fortress "the Bulgarian Machu Picchu" because of the similarities in the organization of the two ancient cities.

The construction of the residence near Hissar is believed to have been started by the Thracian ruler Cotys I (384 BC - 359 BC).

"Philip II of Macedon most likely also visited this fortress. It is about him that Demosthenes says that he spent 11 nightmarish months in the winter of 342 BC fighting the Thracians who inhabited the mountains," explained Dr. Hristov.

The fortress-residence of the Thracian kings is located on a plot of 4 decares, not far from the village of Starosel, which is the site of the largest tombs of Ancient Thracian rulers.

The researchers believe that the connection between the newly-uncovered fortress and the Starosel tombs is clear.

"This is the holy mountain in the mind of the Thracians. We have various archaeological objects located on different levels – afortress, a sanctuary, an altar of sacrifice. Therefore, the comparison with the ancient city of the Incas Machu Picchu is a good one," said Dr. Hristov.

Last summer his team excavated two of the towers of the citadel, whose remains are about 2 m high.

The archaeologists' guess is that the treasure of the Odrysian kingdom was also located in the newly uncovered residence butPhilip II of Macedon most likely stole the gold kept there.

The Odrysian Kingdom was a union of Thracian tribes that existed between 5th and the 3rd century BC. The last Thracian states were conquered by Romans in 46 AD. The most famous Thracian in human history is Spartacus, the man who led a rebellion of gladiators against Rome in 73-71 BC.