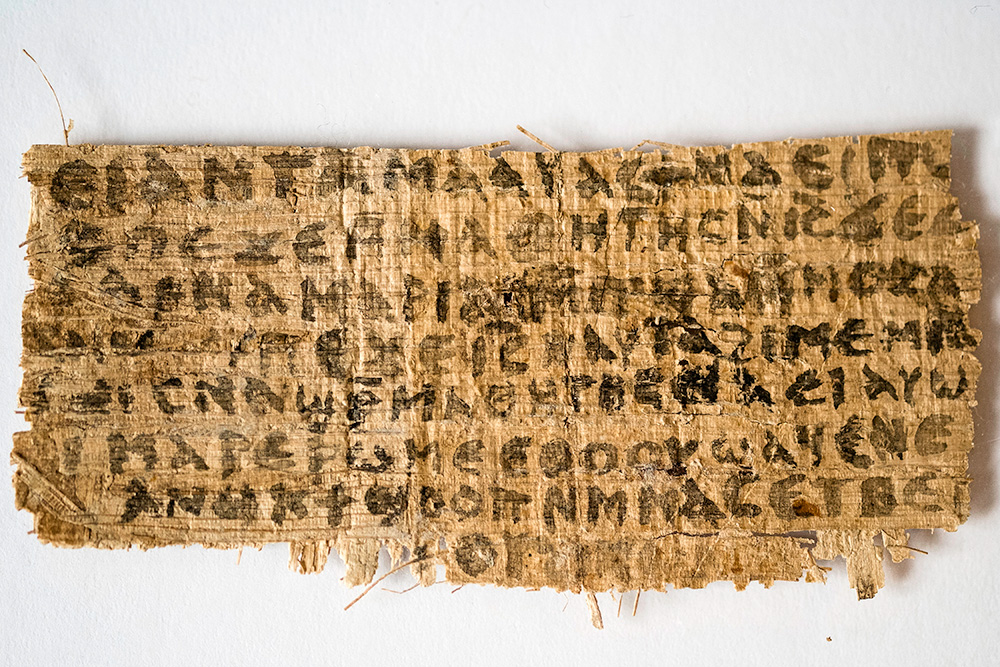 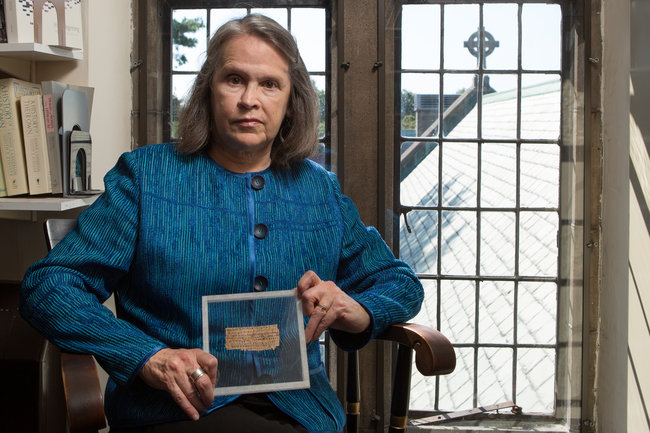 The Gospel of Jesus's Wife: A New Coptic Gospel Papyrus

Did Jesus have a wife?

Karen L. King, a historian at Harvard Divinity School, presented her finding Tuesday at a meeting of Coptic scholars.

In her paper, King notes that the papyrus is the “only extant ancient text which explicitly portrays Jesus as referring to a wife. It does not, however, provide evidence that the historical Jesus was married, given the late date of the fragment and the probable date of original composition only in the second half of the second century.”

At the Tenth International Congress of Coptic Studies on Tuesday, King spoke about her finding and her study of the papyrus fragment, which was provided by anonymous private collector who contacted her to analyze it.

“King and colleague AnneMarie Luijendijk, an associate professor of religion at Princeton University, believe that the fragment is part of a newly discovered gospel,” a news release from Harvard said.

King wrote in her paper: “If the second century date of composition is correct, the fragment does provide direct evidence that claims about Jesus’s marital status first arose over a century after the death of Jesus in the context of intra-Christian controversies over sexuality, marriage, and discipleship.”

As the New York Times reported Tuesday: “Even with many questions unsettled, the discovery could reignite the debate over whether Jesus was married, whether Mary Magdalene was his wife and whether he had a female disciple. These debates date to the early centuries of Christianity, scholars say. But they are relevant today, when global Christianity is roiling over the place of women in ministry and the boundaries of marriage.”

The Smithsonian Channel will premiere a special documentary about the papyrus and King’s research on Sept. 30.

“The fragment’s 33 words, scattered across 14 incomplete lines, leave a good deal to interpretation. But in King’s analysis, and as she argues in a forthcoming article in the Harvard Theological Review, the ‘wife’ Jesus refers to is probably Mary Magdalene, and Jesus appears to be defending her against someone, perhaps one of the male disciples,” Ariel Sabar wrote for Smithsonian Magazine

A draft of King’s paper about the 4th-century papyrus fragment is available on the divinity school Web site.

“This gospel, like others dated to the second century which make opposing claims — that Jesus was celibate, for example — are too late, historically speaking, to provide  any  evidence as to whether the historical Jesus was married or not, [King] says. But the fragment does suggest that 150 years or so after Jesus’s birth, Christians were already taking positions on such questions. Significantly, this new text pushes the date at which some Christians were asserting that Jesus was married back to a time contemporaneous with the earliest assertions that he was celibate,” Harvard Magazine reported.

The news reignited debate about scholarship focused on Jesus’s marital status and the veracity of early church documents.

“King isn’t an archaeologist so how did she come into possession of the piece?” asked a post on the the Zwinglius Redivivus blog, which is managed by Jim West, an adjunct professor of biblical studies at the Quartz Hill School of Theology and a Baptist pastor in Petros, Tenn. “Furthermore, a statement on a papyrus fragment isn’t proof of anything.  It’s nothing more than a statement ‘in thin air’, without substantial context.”

“I don’t believe for a minute she’s faking anything,” says a post on thePaleoBabble blog. “However, the text is unprovenanced, which is a problem. . . . I tend to agree with James [Tabor] and others that the church (read: the Catholic Church and then all those Protestants who blindly followed that tradition) has manipulated the testimony of Mary Magdalene.”

In reaction to the news, Tabor, chair of the religious studies department at the University of North Carolina at Charlotte, wrote:

“I have written extensively on this subject on my blog, suggesting that my colleagues, from Ben Witherington to Bart Ehrman . . . who are so insistent that ‘there is not a shred of evidence that Jesus was married,’ reconsider the question. I have changed my own position since publishing The Jesus Dynasty in 2006 in which I too insisted the ‘Jesus was married’ idea was long on speculation and short on evidence. The implications of the two Talpiot tombs are one factor in my own shift, but in fact I would consider that evidence secondary compared to the textual evidence, including the evidence from silence, that can be mounted. Although I would not attribute or ‘blame’ Karen King, the late Jane Schaberg, Ann Graham Brock, April DeConick, or a host of others for my views, I have been greatly influenced by their work on Mary Magdalene.”

On Twitter, the news prompted the creation of the hashtag #jesuswife, humorous takes on whether the Son of Man had a better half: