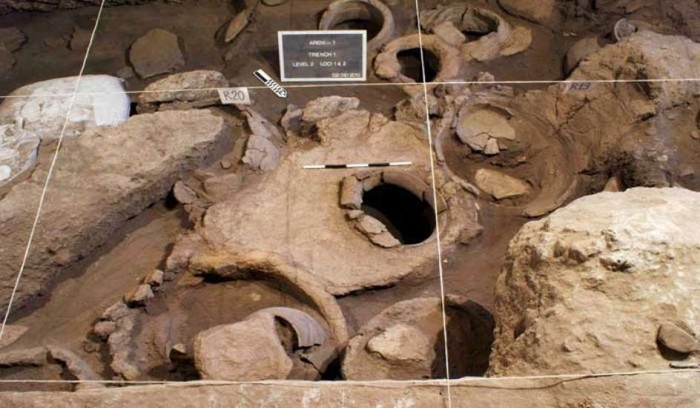 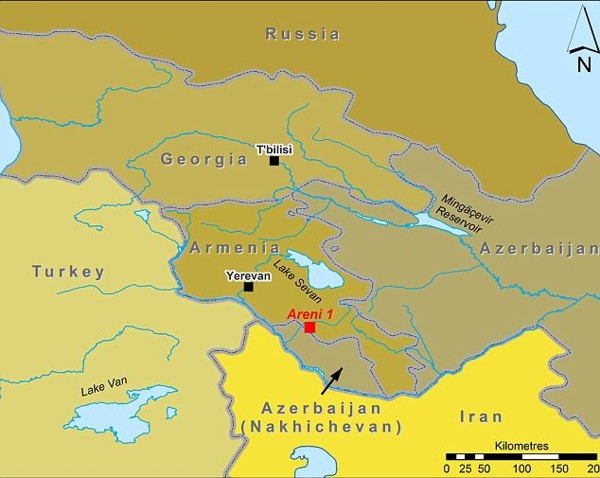 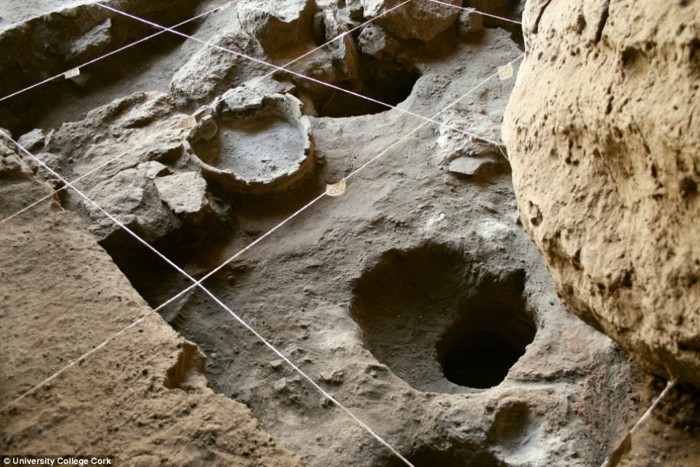 Scientists have discovered the world's oldest known winery, secreted amid dozens of prehistoric graves in a cavern in Armenia, an international research team said Tuesday.

Outside a mountain village still known for its wine-making skill, archaeologists unearthed a large vat set in a platform for treading grapes, along with the well-preserved remains of crushed grapes, seeds and vine leaves, dating to about 6,100 years ago—a thousand years older than other comparable finds.

On three pot shards, researchers from the Cotsen Institute of Archaeology at the University of California, Los Angeles, found a residue of malvidin, a pigment that gives grapes and wine a dark red hue.

The ancient seeds belonged to a domesticated grape variety, known as Vitis vinifera vinifera, that is still used to make red wine today, the team reported.

"It looks like this cave complex was used during the Copper Age as a cemetery and a place of ritual," said UCLA archaeologist Gregory Areshian, who was co-director of the excavation effort. "The production of wine could be related to those rituals."

The find, funded by National Geographic and to be reported Tuesday in the Journal of Archaeological Science, is evidence that the quest for a decent red may be as old as civilization itself. The team involved archaeologists from the U.S., Armenia and Ireland's University College Cork.

"For this time and period, it is a very surprising discovery of advanced large-scale wine production," said biomolecular archaeologist Patrick McGovern, of an authority on the origins of fermented beverages at the University of Pennsylvania Museum in Philadelphia, who was not involved in the project.

No one knows exactly who invented the biotechnology of grape wine. In northern China, villagers made fermented rice wine as early as 9,000 years ago.

The advent of grape wine, though, can be traced to the Middle East through Egyptian tomb paintings, Sumerian clay tablets and the ancient Babylonian Epic of Gilgamesh, arguably the oldest known work of literature. The Bible's Book of Genesis credits Noah as the first to plant a vineyard, make wine, and become intoxicated.

The earliest chemical evidence of grape wine, dating to about 7,400 years ago, was found on pots unearthed at Hajii Firuz Tepe in the Zargos Mountains of Iran. Through an extensive gene-mapping project in 2006, Dr. McGovern and his colleagues analyzed the heritage of more than 110 modern grape cultivars, and narrowed their origin to a region in Georgia, adjacent to present-day Armenia.

The winery cavern, called Areni-1, was originally surveyed during the Cold War era by defense planners from the Soviet Union who were looking for cave shelters deep enough to withstand a nuclear attack. Not until 2007, however, did archeologists explore the complex of 39 caves nestled in a steep canyon at the head of a narrow fertile valley, long planted with orchards and vineyards.

As the Scientists made exploratory trenches dstarted to make exploratory trenches across the cave floor, theyand broke through a thick crust of hardened sheep dung into several layers of remarkablywell-preserved textiles, leather and wooden artifacts, dating to a time when metal tools were starting to replace stone implements and the wheel was first coming into use. The researchers have excavated six graves, of the dozens identified so far in the cave.

They excavated the wine vat, which can hold 14 to 15 gallons of liquid, in September. They also found storage jars, a drinking cup and bowls. Other finds included the earliest known leather shoe, dating to about 5,500 years ago, a discovery announced in June.

"The cave was never looted and never disturbed," said Dr. Areshian. "It gives us this wonderful preservation of artifacts and organic remains."

A Prehistory of Wine

No one knows who first made wine or domesticated wild grapes, but vintners today produce about 6.6 billion gallons of wine every year. Recent archaeological discoveries suggest that the art of fermenting wine is a biotechnology breakthrough as old as civilization itself.

Source: University of Pennsylvania Museum of Archaeology and Anthropology, Journal of Archaeological Science, Proceedings of the National Academy of Sciences, Science News, Archeology.