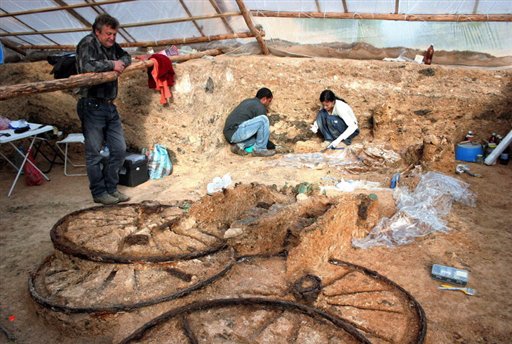 By VESELIN TOSHKOV
The Associated Press

SOFIA, Bulgaria — Archaeologists have unearthed an elaborately decorated 1,800-year-old chariot sheathed in bronze at an ancient Thracian tomb in southeastern Bulgaria, the head of the excavation said Friday.

"The lavishly ornamented four-wheel chariot dates back to the end of the second century A.D.," Veselin Ignatov told The Associated Press in a telephone interview from the site, near the southeastern village of Karanovo.

But he said archaeologists were struggling to keep up with looters, who often ransack ancient sites before the experts can get to them.

The bronze-plated wooden chariot is decorated with scenes from Thracian mythology, including figures of a jumping panther and the carving of a mythological animal with the body of a panther and the tail of a dolphin, Ignatov said.

He said the chariot, with wheels measuring 1.2 meters (four feet) across, was found during excavations in a funerary mound that archaeologists believe was the grave of a wealthy Thracian aristocrat, as he was buried along with his belongings.

The team also unearthed well-preserved wooden and leather objects, some of which the archaeologists believe were horse harnesses. The remains of horses were uncovered nearby. In August, excavations at another ancient Thracian tomb in the same region revealed another four-wheel chariot. Daniela Agre, a senior archaeologist at the Bulgarian Academy of Sciences, had said at the time that it was the first time a completely preserved chariot had been found in Bulgaria. She said previous excavations had only unearthed single parts of chariots — often because ancient sites had been looted.
Some 10,000 Thracian mounds — part of them covering monumental stone tombs — are scattered across the country.

Ignatov said up to 90 percent of the tombs in the region have been completely or partially destroyed by treasure hunters who smuggle the most precious objects abroad.

"The money is badly needed because we are in an uneven race with looters who are often better equipped than our teams," he said.

First mentioned in Homer's "Iliad" as allies of Troy, the Thracians were an Indo-European nomadic people who settled in the central Balkans around 5,000 years ago. They were conquered by Rome in the 1st century, and were assimilated by invading Slav peoples in the 6th century. They had no written language, and so left no records.

Fierce warriors and horse-breeders, the Thracians were also skilled goldsmiths. They established a powerful kingdom in the 5th century B.C. Its capital was thought to be Seutopolis, whose ancient ruins lie under a large artificial lake near Shipka, in an area dubbed "the Bulgarian Valley of Kings" for its many rich tombs.