Ahmose Nefertari, the woman in black Amenhotep I and Ahmose Nefertari

Following her mother actions, Ahmose Nefertari was highly distinguished and helped to reconstruct the country after centuries of foreign rule, principally the Deir el-Medina necropolis. Ahmose Nefertari and her husband, Ahmose I, ruled together for twenty five years (Grimal 1988: 190-193). She was lauded on inscriptions throughout Egypt, from Saï to Tura. Her name appears at the alabaster quarries of Asyut and the limestone quarries at Tura: "God's Wife, Great King's Wife, Lady of the Two Lands, King's Daughter, King's Sister, King's Mother, and Princess of the Two Lands." (Urk., IV, 25, 1-5, in Sethe 1906).

On a stela at Abydos, the inscription states that Ahmose I asked for her approval before he erected a stela in honor of his grandmother, Queen Tetisheri (Harvey 2004: 3-6). Here, Ahmose refers to Queen Tetisheri as "The Mother of my Mother, and the Mother of my Father, Great King's Wife and King's Mother, Tetisheri" (Egyptian Museum CG 34002) (Porter and Moss 2004: 91-92).

In these roles, she performed several civil and religious duties, such as the control of a college of priestesses (temple musicians and singers), the divine offerings to the god Amun, and the workers of the temple fields and a number of dignitaries. The God’s Wife wielded considerable political influence and worked with the Pharaoh in temple rituals and festivals. Ahmose Nefertari was honored for many centuries as "Hereditary Princess"; "Great of Grace"; "Great of Praises"; "King's Daughter"; "King's Sister"; "King's Great Wife"; "God's Wife of Amun", "Great Ruler", and "Mistress of Upper and Lower Egypt" (Bleeker 1959: 261-268; Gitton 1976: 65-89).

She was the mother of King Amenhotep I, and ruled the country for him as Queen-Regent. After her death, Queen Ahmose-Nefertari became a patron deity of the Theban necropolis, alongside her son King Amenhotep I (Laporta and Gestoso Singer 2010: 8-10). She was painted on a tomb wall 400 years after she died, when she was being worshipped as a goddess in Thebes.

During her regency with Amenhotep I, they inaugurated the workman’s village at Deir el-Medina, on the West Bank of the Nile at Luxor. There is a temple at Deir el-Medina dedicated to Amenhotep I –known as the "Lord of the town" (Robins 1993: 44; Bryan 2000: 213)- and Ahmose Nefertari –known as the "Lady of the West", and the "Mistress of the Sky"-, where both were deified by the villagers after their deaths until the late Ramesside period (Robins 1993: 44; Tyldesley 1998: 62).

In the Tomb of Inerkhau (TT 359), the "Foreman of the Lord of the Two Lands in the Place of Truth" (under Ramesses III and Ramesses IV), in Deir el-Medina, Queen Ahmose Nefertari, the "Great King's Wife; Great King's Mother, Lady of the Two Lands", once again with black colored skin, wears an ample pleated dress, tied at the waist by a long multicolored ribbon. Her wrists and her upper arms are decorated with bracelets; a large necklace hangs around her neck. On her head, she wears a composite headpiece composed of a red coving supporting two cobras and a vulture (images of Nekhbet, the tutelary vulture goddess of Upper Egypt and Wadjet, the tutelary cobra goddess of the Lower Egypt). She is depicted with the fly-whisk, which is a typical insignia of regalia (Lepsius 1972: Ab. III, Bd 5, Bl 1).

In a private votive stela, found in Deir el-Medina, King Amenhotep I is normally depicted with red skin, unlike his mother, Queen Ahmose Nefertari, who is shown with black skin (Museo Egizio in Turin, Inv. C. 1452, CGT 50034) (Vassilika 2009: 76). Stela of King Amenhotep I and his mother Ahmose Nefertari

Also, in Deir el-Medina were found some 20 votive statues, representing the deified Queen, often in a standard fashion. In one of these wooden statues, created by or for the workman Djehutyhermektef (TT 357), during the first years of Ramesses II (now at the Louvre Museum, N 470), the Queen is shown standing upright, dressed in a tight long garment, holding a scepter (or a fly whisk), and wearing the vulture headdress. In two statuettes at the Museo Egizio in Turin (Inv. S. 6128, C. 1388), the deified queen is shown as a youthful woman wearing a figure-hugging, ankle-length, dress. One of the figures shows her with a black face, though the arms and feet are not darkened. This suggests -as Vassilika (2009: 78-79)- that there is an iconographic motive underlying her coloring and not a genetic one. She wears a gold-colored vulture headdress of deified queens, and the modius crown. The statue was dedicated on behalf of the deceased man Ani.

She is known to have still been alive in the first years of her grandson, Thutmose I, who honored her placing a statue in the temple at Karnak, where her mortuary cult was observed long after her death. Her mortuary temple ("men-set") was built in the vicinity of Dra Abu el-Naga and probably not far from her tomb. She was probably buried in the royal cemetery of the 17th Dynasty, at Dra Abu el-Naga. Her mummy and outer coffin were found into the royal mummy cache (Deir el-Bahari, Tomb 320) (now at the Cairo Museum). The mummy shows that she was around 65 or 70 when she died. Her mortuary temple contained a wooden statue of the queen, covered in black bitumen and used during a yearly procession through Western Thebes. This statue inspired all the other black images of this Queen. Also, it was found a wooden ornament, depicting a black Ahmose Nefertari in the company of her son Amenhotep I (now in the Museo Egizio at Turin). In tombs and stelae, her skin has been painted black as well. Some scholars (Bernal 1987: 241-242; and wrongly according to Bernal 1987: 384, n. 40, also Gardiner 1961: 213-214) (1) have suggested that this is a sign of her Nubian ancestry, but we believe that it was because black skin meant new life to the Egyptians. The color black was associated with rebirth, fertility, death and Egypt itself and the god Amun was also depicted with black skin. Her black skin was a symbol of fertility and a reference to her position as the mother of Egypt, also known as Kemt, the fertile "Black Land". She was revered as a "Goddess of Resurrection" as well. Osiris, the "King of the Afterlife", was called the "Black One", and Anubis, the "God of Embalming", was shown as a black jackal or dog, even though real jackals and dogs are typically brown.

(1) I am grateful to Wayne Ford for the suggestion.

The lotus bloom was often held by deceased women, representing rebirth, as in this fragment of wall painting from the tomb of Kynebu, a priest during the reign of Ramesses VIII (British Museum, EA 37994). The black color of her skin symbolizes regeneration. Queen Ahmose Nefertari wears the vulture head-dress of the goddess Mut, consort of Amun of Thebes, surmounted by a sun-disc and ostrich plumes. The cobra on her crown and the flail in one hand indicate her royal status. 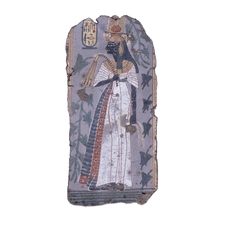 Fragment of painting from the tomb of Kynebu

In short, Queen Ahmose Nefertari was arguably the most venerated women in Egyptian history, and the grandmother of the 18th Dynasty, The Golden Age, of Egypt.

Gardiner, A. Egypt of the Pharaohs. Oxford, Oxford University Press, 1961.

Lesko, B., The Great Goddess of Egypt. Oklahoma, University of Oklahoma, 1999.