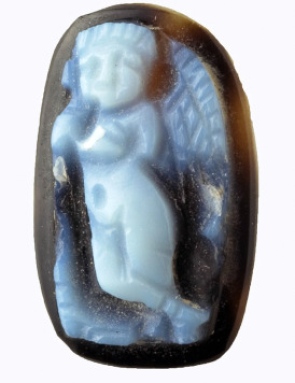 Israel Antiquities Authority says added inlaid semi-precious stone is of the 'Eros in mourning,' one of a group of visual motifs linked with mourning practices.

Israeli archeologists unveiled a 2,000 year old semi-precious cameo bearing the image of Cupid on Monday, which the Israel Antiquities Authorities (IAA) said was among several items located in the City of David archeological area in Jerusalem's Old City in the last 12 months.

The cameo, which will be displayed at the 11th Annual City of David Archaeology Conference scheduled to take place later this week, is 1 cm in length and 0.7 cm in width, and was discovered in the Givati Parking Lot Excavation, a part of the Jerusalem Walls National Park.

The excavation, according to an IAA statement, has been conducted by the organization under the direction of Dr. Doron Ben Ami and Yana Tchekhanovets and funded by the Ir David Foundation.

Dr. Doron Ben Ami, of the IAA, said that the cameo was "made from two layers of semi-precious onyx stone. The upper layer, into which the image of cupid is engraved is a striking blue color which contrasts with the dark brown background color of the lower layer."

"The brown layer is the side of the cameo which would have been inserted into the round metal setting of a piece of jewelry, apparently an earring," Ben Ami said, adding that the "cupid’s left hand is resting on an upside-down torch which symbolizes the cessation of life."

According to Dr. Ben Ami, the "discovery, together with other important finds that we uncovered from this unusual large Roman structure at the City of David, contribute significantly to our understanding of the nature of Jerusalem’s Roman Period.”"

The IAA statement added that the inlaid stone was of the "Eros in mourning" type, one of a group of visual motifs linked with the imagery of mourning practices.